Wasserstein's The Elements of Style 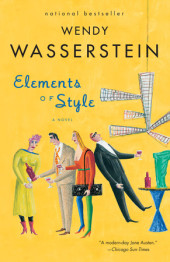 We visited friends in New York a few weeks ago, and took a drive through Greenwich, Connecticut. I have not spent much time in the northeast, but I've read some Edith Wharton, and the stories about the New York rich never fail to fascinate me. I think most people are fascinated by people who have ultimate freedom, and having lots of money is a great way to achieve that. However, ultimate freedom doesn't mean you're happy, though I resist the comforting temptation of some to justify the elegant wealth of certain people by saying that they must be unhappy in order to have that much money. It's the same specious argument that says all thin people are starving, but that might be another post. Regardless, big houses can mean a lot of things, but for Wasserstein's Elements of Style it means dysfunction and unhappiness.

I was told that this novel made a stir when it first emerged among the Upper East side set. I don't live in NYC, so this little hiccup escaped my notice, but I could imagine the real horror of seeing yourself in one of Wendy's characters. None of them, except the single, to be pitied, relatively poor pediatrician had any real morals. The rest of the characters were social climbers, husband-stealers, and fashionably dressed women with far more money than sense. It was pretty great reading about them. A few moments of humility allowed for some sympathy, but mostly Wasserstein paraded the worst of worst across her pages.

Ultimately, this novel is a cheaper, more poorly written version of Gatsby with the same 'they recede into their money' moral at the end, but it was a fabulous read. It was great for my plane ride home, and perhaps it's all a pack of lies (fiction's native habitat), but it was fun (in a grimacing kind of way) thinking that people like that actually exist.

The Glitter and the Gold by Consuelo Vanderbilt Balsan - a memoir from the wealthy of the wealthy. Although set in turn of the century, still a wonderful insight into monied NY society and the real impact that environment has on people.

The Devil Wears Prada - same reason as The Nanny Diaries