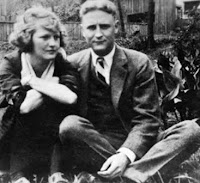 The only problem was, he didn't know how to budget. I’m a HUGE fan of F. Scott and always thought that he never made that much. Turns out, according to some old tax returns that Matthew Bruccoli saved from the trash heap, he made the equivalent of $500,000 a year in today’s dollars. Because of the income tax rules (those were the days), he only paid about 5% on his total earnings. Where did all his money go? Well, there’s that (probably apocryphal) story about F. Scott throwing dollar bills out of his convertible while he and his pal Ernest (Hemingway) were driving around one day in France; but, in actuality, the majority of his money went to paying for Zelda’s medical care. She was in and out of sanatoriums for the last 18 years of her life and some of them – like the one in Switzerland – were quite pricey.

More from the American Spectator.