An Interview with Jonathan Odell 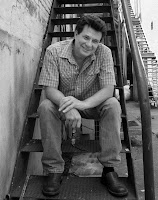 m Library caught up with Jonathan Odell to discuss his stunning second novel The Healing.
Part 1

What is your writing process and how do you create such real characters?

I’ve tried everything that other writers have recommended - getting up in the morning, work till noon – but none of that works for me. My process is to follow the voices. I’m very verbal. I’m not visual. I think most writers are probably visual, but I wait until voices come to me and then I pick up the dialogue. I write what I’m hearing. What helps me, too, is that I read a lot of history. I spend a lot of time in libraries looking at oral histories to find people who talked like the people in my head so that I can get the language right. If I can hear the voice, then I can write the book. It kind of dictates itself that way. I put in the pictures later. In fact, the first draft of the first book that I wrote was all dialogue. I was really disappointed when I found out that the characters were supposed to have bodies, that they were supposed to live in houses. I had to teach myself how to do the description stuff. That does not come second nature to me. To prime the pump, I start with the dialogue. I have people talk to each other, and I write that down and then that leads to a scene.

Whom did you hear first: Polly Shine or Grenada?

Polly’s voice was the first real voice. Granada came years ago, but I could never make her sound real. She felt artificial. I was talking to my partner, and I said: "I need to give Granada a bigger life. She feels so one-dimensional." He asked me to read some of what I’d written. I must have given him about 30 pages or so, and there was one paragraph where Granada was thinking back on an old woman who taught her the trade [midwifery]. And my partner said: “You know, most of that is pretty boring until you talk about that old woman in a memory. Why don’t you make her a character?” And I said, “Well, I’ll try.” And as soon as I wrote the first sentence about her [Polly], the whole book changed. It was like she took over.

Both of your novels investigate the theme of remembering. Why is this important to you?

I used to think that remembering was something that was unchangeable, that you had certain memories and that you carried those memories with you, but through some of the therapy work that I’ve done, I’ve come to believe that how we remember is more important that what we remember. We have choice over how we remember things and most of our lives are dictated by how we see the past. We have a moral responsibility to see the past as truthfully as we can. Sometimes that means changing our minds. Sometimes that means forgiveness. Sometimes that means learning other people’s stories rather than mine, and letting that story contradict my story. So, as a white man when I went back to Mississippi, and I started talking to all these black people who were outside my little white bubble that I lived in as I grew up, and started listening to their stories, I started remembering my own past differently. It was like “Oh, that’s who you were and that’s who I was. I was a little spoiled white supremacist kid and that’s why you reacted the way you did, and that was why you couldn’t stick up for yourselves." Remembering is so powerful. We don’t know who we are, what we’re doing, where we’re going in our lives, until we remember accurately who we were. I think Faulkner said it: “ The past is not dead. It’s not even past” The past isn’t dead, it’s still forming, and we work on it day by day. Memories are very malleable, and we are responsible as adults to take control of our memories, not to just take things down as law from our parents or history books or people we admire. Even though we admire them, they lie to us because they have a different interpretation.

Coming out of the 1960s South, I was raised where Martin Luther King, Jr. was called a communist, where “our black people are happy, it’s the outside ones who are agitators,' where white people were all good-natured, and all those Klan people were just exceptions to the rule. In doing this re-remembering, it’s painful because sometimes you have to go back and emotionally confront the people you love the most because it wasn’t just the evil people telling you this, it was my pastor at church, my parents. The racism that I learned, that was passed to me was toxic, and I had to go back and re-remember these things. And this is the root of Polly’s wisdom: you have to remember who you are. Don’t believe what they tell you about who you are and what your past as been. You have to take hold of your own memory.