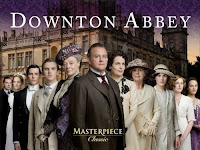 Who isn't obsessed with this enthralling "upstairs-downstairs" series? The only problem is that we now have to wait until season 3, which is why I offer a palliative to all of you who are experiencing intense DTs from Downton Abbey withdrawal, which I definitely am.

Below Stairs by Margaret Powell: Powell's saucy expose on life in service provided inspiration for Julian Fellowes' massively successful series Downton Abbey. Powell worked for a number of families, most of which were exceedingly difficult, and the range of her experiences gives a wonderful overview of the type of life one could expect as a servant in Britain before
World War II.

Rose: My Life in Service to Lady Astor by Rosina Harrison: Those looking for insights into the notorious Lady Astor's character will be disappointed. Rose is close-lipped about the first female MP, who may or may not have been a Nazi sympathizer. Never fear, though: this lively memoir opens the door on life in the ritzy upper-class world of the British Aristocracy, and though it tows the party line to a certain extent, it provides an adequate picture of one lady's maid's dynamic life.

Life in the English Country House by Mark Girouard: This historical survey of the English country house is more architectural in scope than social. Those looking for an abundance of details about daily life in one of these beautiful homes will want to look elsewhere. Still, Girouard describes the rise and fall of this classic feature of the English countryside, providing insight into how and why the country house became the object of romance and interest.

Up and Downstairs: The History of the Country House Servant by Jeremy Musson: Whereas Girouard's work focuses on the physical development of the country house, Musson's book charts the history of the people who served in these elite establishments. Musson's history abounds with wonderful details.

Inheritance: The Story of Knole and the Sackvilles by Robert Sackville-West: Built during Elizabethan times as a Calendar House (a building that boasts 365 rooms, 52 stairwells, and 7 courtyards), Knole is a charming example of the country house. Knole is still occupied by the Sackville family - though the house is run by the National Trust and partially open to the public. Written by the seventh Lord Sackville-West, this history tells the story of the beautiful home (that was also immortalized by Virginia Woolf in her novel Orlando), and the family of characters that lived in it for over 400 years.

Consuelo and Alva Vanderbilt: The story of a Daughter and a Mother in the Gilded Age by Amanda Mackenzie Stuart: Cora Grantham was not the only American heiress to save an British family's ancestral pile. In the late 19th century, Consuelo Vanderbilt, granddaughter to Commodore Vanderbilt, was sent to England to marry the Duke of Marlborough and secure herself a royal title for the benefit of her ambitious mother. The marriage was unsuccessful, and this biography covers much more than Consuelo's few years as the Duchess of Marlborough, but readers interested in Downton Abbey will find the descriptions of her married life and experiences in of England's most charming (and one of the largest) great houses - Blenheim - to be quite interesting.